The log church was built in 1799 and is the oldest church west of the Allegheny Mountains.   Missionaries from Quebec arrived in Cahokia on December 8, 1698, the Feast of the Immaculate Conception, and offered the first Mass on the banks of the Mississippi River.  They continued traveling south on the Mississippi to what is now Arkansas.  They failed to find a better area than Cahokia, so they returned to the area in January of 1699. Their purpose was to convert the local Tamaroa Indians.  The first Log Church was dedicated on May 14, 1699.  The original structure burned in approximately 1740 and the structure standing today was built from the logs salvaged from the original church.  It was dedicated on September 24, 1799.  Holy Family Church has been a Catholic parish since 1699, which makes it the oldest continuously operating parish in the United States.
The timbers are all black walnut, 90% of which are original.  A wood expert estimates that these timbers are from trees that were growing here when Columbus landed in the New World in 1492.  The structure is called “Post on Sill.” The walls lean in about 8 inches and the floor slants approximately 12 inches going down to the altar.  The chinking between the logs, except for the V section near the right side chapel, was all replaced in the 1940s during restoration in preparation of the Parish’s 250th Anniversary.  The two small rooms on either side of the church were added in the 1840s.  One is now used as a sacristy and the other as a Chapel dedicated to the Blessed Virgin Mary. The Main Altar dates to 1850 and is the traditional pre-Vatican II style. The altar on the right side in the Lady Chapel is believed to be the original altar of the church. One single beam runs the entire length of the church from front to back and supports the trusses of the roof.  No nails were used in the original structure, only wooden pegs.  The floor structure is not original, nor is the glass in the windows, except for the round Rose Window above the front doors, in which only one pane of glass has been replaced.
This Log Church is the only one of five built in this French Colonial style that still exists in North America.  Three in Canada exist, but are unusable.  This church and the Cahokia courthouse, also of similar construction, are the only two buildings remaining from here to Oregon which Lewis & Clark would have seen during their expedition.  Other notable visitors to the area and the church were Abraham Lincoln and Charles Lindbergh.
Some noteworthy historic items are two candlesticks on the lower front shelf of the Main Altar, which were a gift from King Louis XIV of France, and the original bell in the tower, which was a gift from King Louis XV (that bell is cracked and is no longer used).  The original chalice that was used at the first Mass in 1698 and by Pope John Paul II during his Pastoral Visit to St. Louis in 1999 is in Holy Family's museum.  The large cross on the right wall is a Mission Cross.  The French translates “the one who will persevere until the end shall be saved.”  The years listed on the cross list dates of parish missions, or retreats.  The flags hanging from the choir loft represent the four countries who successively governed this area; they are from left to right:  the flag of Spain, the flag of the French Bourbon Kings, the British, and then the Colonial flag of the United States.
The grounds all around the church were the original cemetery of the Parish.  Behind the Log Church is a row of Priests’ graves.  The first grave was Holy Family’s second pastor and other priests of the parish are buried nearby.  There is a list of people from the parish and the surrounding area who participated in the Revolutionary War outside the back door next to the graves of some of the Jarrott family members.  The Jarrott family was a prominent family from the parish who lived in the brick house on the other side of our new church.  The Jarrott Mansion is also a historic landmark and was once owned by the Parish and served as the first school and convent for the nuns.
Prior to the church which stands today next to the Log Church was a rock church built in the Gothic style and dedicated in 1893.  During that time the Log Church was covered with clapboards (which protected and helped preserve the wood during the years when coal burning pollution was so bad.  During that period the church was used as a parish hall.  During the 1940's, in preparation for the celebration of the parish’s 250th Anniversary, the church was renovated and restored.  It is used frequently for weddings, funerals, and on special celebrations.  Every Sunday the traditional Latin Mass is celebrated here at 9:00 a.m. 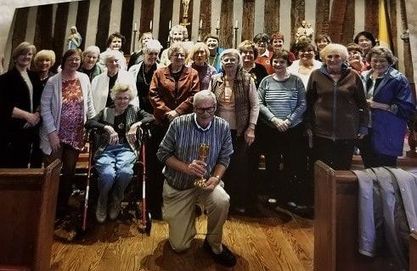